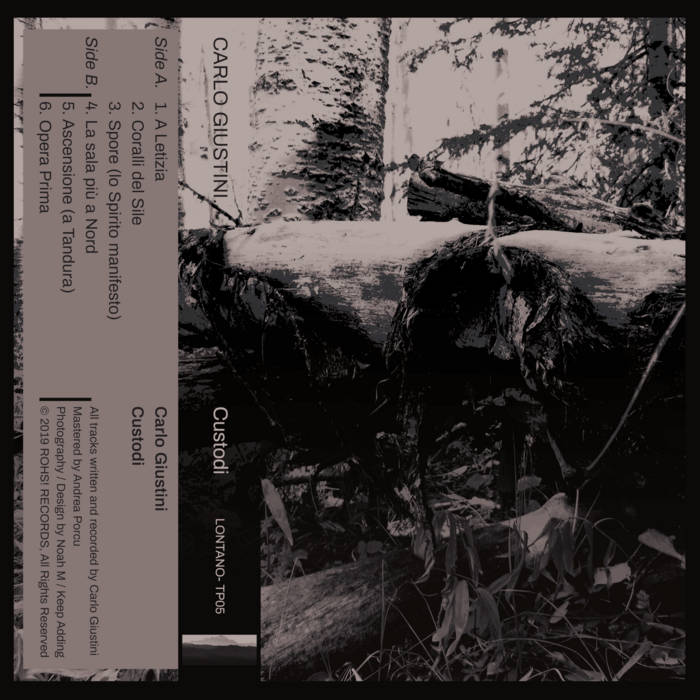 sepulchre19 Take the shimmering guitars of the Cocteau Twins, dilate and lengthen with the wistfulness of Boards of Canada and release them like one of Robert Rich’s haunting soundscapes with a jazz coda and you have Carlo Giustini's 'Custodi'. It's brilliant. Favorite track: A1. A Letizia.

Halftribe I was recommended to check this out and it did'nt disappoint. Hints of The Caretaker in a dusty nostalgic glimpse of bygone days. Lovely.

Visual Complexity The artwork sets the perfect tone for what you're about to experience, and it's just as beautiful as you'd expect. The distant background noises and the perfect lifting atmosphere is just breathtaking in every way. "A Letizia" resonates deeply in my soul, but it's all perfect in your journey in this nature. Favorite track: A1. A Letizia.
more...

...”it’s as if someone has dusted off a 1920’s 78rpm and played it back for you. Only thing is you are part of the actual scenario, almost transported in time, or between eras, now and then”... (TJ Norris)

Is it possible to capture the sound of a state of being, of a memory, of a past sensation?
Is there a possibility to translate a thought which once was into vibrational waves?
Behind this concept is based much of this work, this research carried out in the early autumn days of 2018.
The spark that started this research came by chance, or rather this spark was manifested to me in a place full of heavy memory, full of words, rich of dense and contradictory emotions. It was mid-August and I was at the local central bar in my neighborhood in Sant’Angelo. At the bar counter I happened to hear a tale that struck me in particular: a gentleman holding a glass of merlot told a friend the story of the tragic end of the custodians of Villa Letizia:
Villa Letizia is an ancient Venetian villa located inside the national park of the river Sile, a structure of the 18th century located right in front of my house, a villa which I see every day from my window while I have breakfast in the kitchen.

The two custodians of this villa, husband and wife, lived there for several years at the beginning of the 20th century, probably passing most of their life between the thick and cold walls of the mansion, keeping alive and safe it’s beauty, learning to recognize it’s sound and voice, it’s hidden messages. Every day single day for who knows how many years they observed the same landscape that I observe. Enjoying the song of the same birds, listening to the same gurgling of the river Sile that crosses the lawn.

Well what really hit me in the story of that gentleman was the dynamics of the death of the two custodians.
According to his story, the husband was quite a connoisseur of mushrooms. One morning, however, he committed a fatal mistake, picking up what he thought were mere white mushrooms, but instead they were none other than Amanita Phalloide (or angel of death), a very poisonous mushroom that at first can be confused with several other edible species.
The two keepers, unaware of their destiny, cooked and ate the Amanita, dying the next day with excruciating liver pains.
This research of mine is dedicated to this couple of lovers, of workers, of simple people linked to a specific place, a place that I also feel mine.
I tried to capture the scent of their essence, their memory, their past movements, collecting most of the field recordings in the gardens of Villa Letizia. Capturing it’s mellow and gloomy song, hoping to find traces of the non fading memory of who once was but probably never left.

All field recordings have been recorded through a couple of walkmans and a microcassette tape recorder.
The track "La sala più a Nord" contains recordings of my kitchen and my movements mixed up with field recordings captured in the Northern side of the garden of Villa Letizia, (no musical instruments were used on this track)
Track 1 and 3 and 4 are first single takes.
To assimilate the full sound spectrum of these recordings and feel it's hidden tones & octaves, a pretty high volume is recommended.

Review by The Sunday Experience - marklosingtoday.wordpress.com/2020/01/11/carlo-giustini/