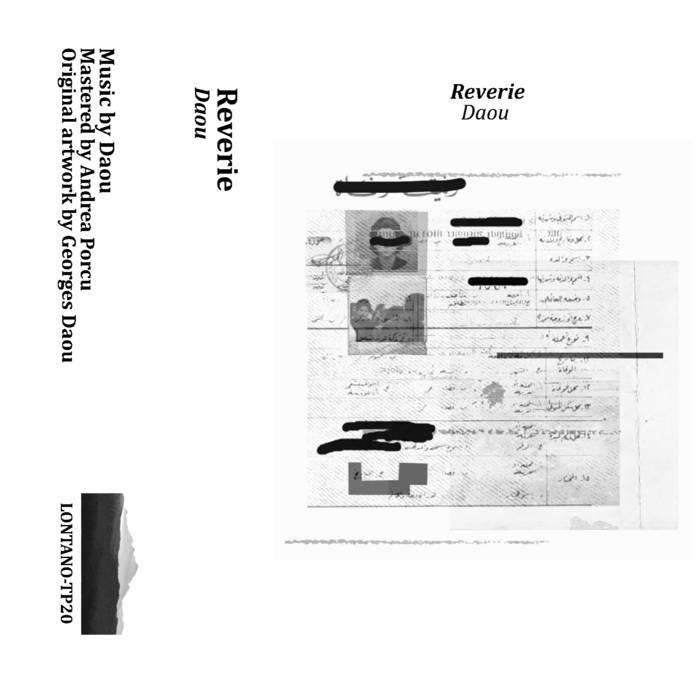 PadraigC Very beautiful music, this is a really good release. I found the notes excellent & evocative, as I listened to this I felt transported to the landscape described.
I gifted it to a friend, who asked me was the lady real! Favorite track: B1. Fireside.

jeremy clarke a moving collection when considered with the accompanying text. sweet and delicate field recordings. a gem, this work of the heart..

“Reverie” portrays fragments of a memory of a penurious old lady who once lived beneath the watchtower, in an abandoned house with her cow. She was enslaved and mistreated by her siblings after her husband passed away a few years back. She led a life of misery and loneliness, but one cannot help but wondering about her past life and hoping that sometime in earlier years, she was happy and enjoying her days.

This is a tribute to this random human being whose life didn’t matter and whose memory is fading over the years. It’s a celebration of her life and a fiction of what could it be.

A fig tree stands up the hill, surrounded by a herd of cattle chanting melodies and playing the chimes.

Review by Stationary Travels!
Through a Musical Lens: Reverie by Daou
How many times have we walked or driven past another human being living a shattered life? Random by happenstance and anonymous save for their fleeting presence as we pass by, how often do we take time to ponder what brought them to that point and whether they once were happy or could be again? On his new album Reverie, Paris-based architect, musician and multidisciplinary artist Georges Daou does just that.
Through an immersive blend of pastoral field recordings and ambient soundscapes generated by guitars, synths, loops & pedals, Daou fashions an imaginary soundtrack to the story of “a penurious old lady” of whom he holds a distant memory from his childhood in the mountains of Lebanon. All we know of her is that she lived in an abandoned house with her cow and had been badly mistreated by her siblings after the death of her husband. What appears to haunt Daou is not so much her sad state of affairs as the idea of the happiness she may have lost and what could have been had her life taken a different path.

Really, Reverie is more than a soundtrack. As the sole lens through which we experience this multi-layered memory, it is the ‘film’ as well. It is not surprising to learn that, in addition to being an architect and musician, Daou also works in photography and collage, especially when hearing the way in which uses field recordings gathered in the French countryside to frame the musical passages that drive the narrative – the rhythmic crunch of footfall on a gravel path, a breeze rushing through the leaves of nearby trees, the distant chiming of bells. These sounds put the listener in the scene as the music explores the tragic subtext of our protagonist. She may have been a random being to all but a few, but she was a human being, and it is the empathetic acknowledgement of that humanity along with its thoughtful sound design that makes Reverie such a hauntingly beautiful record.
(Review by Stationary Travels Blog - stationarytravels.wordpress.com/2023/02/05/through-a-musical-lens-reverie-by-daou)