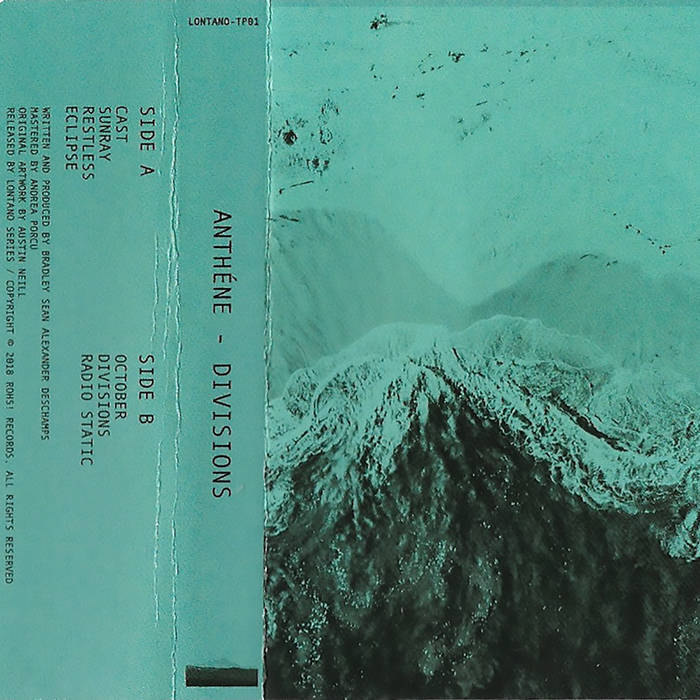 orlandolovekill Like the slow unravelling of a roll of sonic tenderness.

James This just hits me in that magical place. So inspiring! Favorite track: A1. Cast.

Lost Tribe Sound Tender and moving sound formations that keep your head in the clouds. The depth, bits of interesting sound morsels, and the composed development of these pieces make for a worthwhile trip.

Instruments used by the artist: AM/FM radio, glockenspiel, a guitar played with a screwdriver and manipulated field recordings taken from a mobile phone.

Divisions is the newest release by Toronto-based Bradley Sean Alexander Deschamps, also known as Anthéne. Divisions carries the same cinematic quality as his earlier output, yet distinguishes itself from releases like Repose and Aurora in terms of textures and more dynamic usage of melody. Aside from his personal releases, Deschamps has brought out familiar faces like Celer, Endurance, and Forest Management on his own label Polar Seas Recordings. Divisions is part of the Lontano series on ROHS!, a new ambient division of the Berlin based label.
Divisions evokes a strong sense of longing, strange fernweh to no-one knows where. It’s an amazing road trip tape, for the early misty morning or the late, cold star-speckled nights. Cast is a detailed piece resembling this slow and comfortable immersion into unfamiliar territory. Stepping into calm, yet deep, water and hoping for the best. Sunray is a guitar loop filled epic, growing bolder and more hopeful with each iteration. After these tracks, the mood on the A-side evolves toward darker territories. Restless and Eclipse are magnificent dark ambient gems, painting stretched spacious landscapes.
B-side’s Divisions is the introverted climax, relying on more defined field recordings to add to the tension created.
Beauty, sadness, the wonder of stillness.
Review by Zenevloed - zenevloed.nl/featured/reviewed-anthene-divisions-rohs/

At what point does something become light or dark? It’s easy to point at something in a steady state and make an observation, but for something in flux, when does the crossover happen on the continuum of change? At what point in the sunrise is night relegated? Divisions makes me muse over this notion of dividing lines and separations, as it chooses not to enforce a strict standard of yin and yang: light blends into dark, happy melts into sad, pleasure shifts to pain.

There are overt moments for sure, opposing ends of the spectrum delineated by relegation to their logical ends. Sophomore “Sunray” is the brightest piece here, bending guitars through soft filtrations, endlessly pleasant evocations of warmth and high moods encouraged by the beaming, golden light. Drones radiate and reflect, feeding into one another from sources and subjects in a brilliant landscape. But that is balanced by immediate follower “Restless”, whose methodical clickings and pulsating motions breathe to the rhythm of some life support machine. It ticks and ruminates, flung far from freedom and fun, alone.

Much of the record labours in no man’s land between these though: aptly titled mid-album “Eclipse” smooths out into slow drone cyclings that unfurl with majestic grace. Coronal flares beam round the Moon’s silhouette in thin bursts of energy, this paradoxical moment of charged lightness right at what should be the nadir of totality. It’s like a glimpse of redemption, a reminder of the glowing possibility behind the obfuscation.

And where Autumn should be arriving in “October” we find the most beautiful piece of anthéne’s career thus far, a track filled with lush drone sustenance and angelic vocal croonings twirling in a fatiguing world. Guitars flutter in crooning tones, the piece stuttering and jamming as it cools and contracts, evolving slowly and imperceptibly into inevitable collapse. Should it feel sorrow in this dying land, or rather continue onwards and enjoy the beauty of these fading moments?

Maybe this is being overthought, maybe we don’t need an answer until there is suredness. Closing “Radio Static” washes over in a haze of buzzing but gentle passages, guitar drones revolving around some shattered core of detuned radio noise caught between instances. Voices bleed through the walls, indistinct and lost in this purgatory realm: this is neither left or right, black or white, red or blue, yes or no, but that doesn’t make it uncertain. Here in the centre at the end is a peculiar sense of bliss and elevation, of detachment from specificity. Let’s just see where it goes, for a little while, and say for certain when the time feels right.
Review by HearFeel - hearfeel.co.uk/2018/08/21/anthene-divisions/